Yesterday morning I went out at dawn to check the vines. The mown areas were white with frost and crunchy underfoot. It looked so beautiful but the lower slopes held a frightening sight. 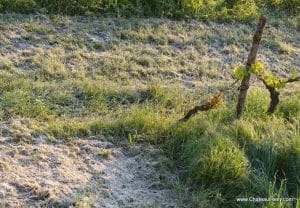 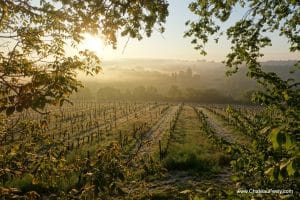 The ancient semillon that follows the east facing slope away from the Wine Cottage terrace and winery. 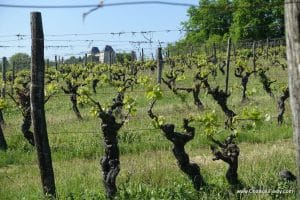 Happy vines at the top. 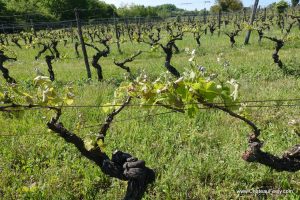 Not so happy vines near the bottom of the slope. 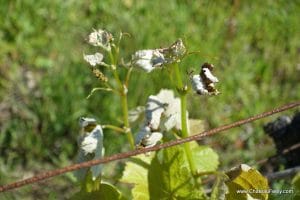 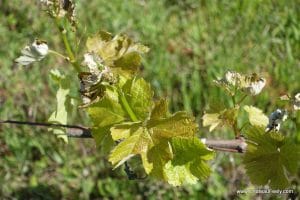 While some are saying they are 100% affected chez nous it looks like about a third have been affected. We don’t know if it means we lose a full third of our harvest. If you have read Saving our Skins you know it starts with a walk to check the vines – that time we lost almost half our crop to frost. (If you have read any of Caro’s books please consider putting a review on Amazon or Goodreads – good reviews make a big difference to the visibility of books. Let us know what you think of the new book Glass Half Full and the new wines.) 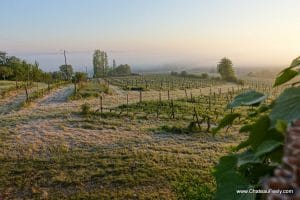 Those views are stunning but its hard for me to look at these photos without seeing what they mean for us. That said we can count ourselves lucky as I chatted with people yesterday who have lost 90% of their harvest.

The longer haired places weren’t nearly as white. You can see a net difference between the whiteness on the short haired rows and the long haired rows. I would guess that those with grass cover were a little better off than those without. In addition – all other things equal – those that are farmed organically would have probably fared better than those who had chemical fertiliser – which as I explain in the why organic series makes the vines take up more water and hence makes them more susceptible to frost and to fungal disease.

The dawn walk gave me a chance to photograph two beautiful deer passing through the Resonance merlot vineyard. 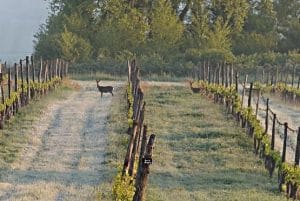 And give thanks for the beauty and wonder of nature that surrounds us in spite of the frost.

Chateau Feely biodynamic vineyard and organic wine estate is in Saussignac in the Dordogne in South West France. Buy our organic wines online; read about us in our blog and info pages, visit us for a wine and food pairing lunch, a guided tour, a multi day walking tour, wine school or just relax in our ecological accommodation. 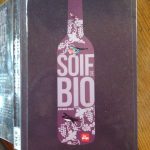 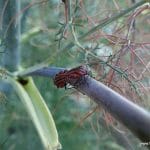 Making love on a bed of fennelOrganic farming, Why choose Organic Wine, Winegrowing
We use cookies to ensure that we give you the best experience on our website. If you continue to use this site we will assume that you are happy with it.AcceptRead more