Global glyphosate statistics cause for alarm

Herbicide, specifically glyphosate use, grew more than 10 times in 20 years.

In 20 years from 1995 to 2014 total global glyphosate use (agricultural plus non-agricultural) went from 67 million kg in 1995 to 826 million kg in 2014 (see the research article with global herbicide use and more). Glyphosate is a herbicide that is widely available under the brand name Roundup by Monsanto. Many people would recognise the word Roundup more easily than the word glyphosate. The world health organisation classified glyphosate as ‘probably carcinogenic in humans.’

There are many reasons for concern: human health, soil health and long term sustainability. Certain weeds have also become resistant to herbicide. In 2010 farmland in the USA afflicted with herbicide resistant weeds was already estimated to be 10 million hectares.

A recent study of 10 Californian wines showed that all of them contained glyphosate residue. Further thought provoking research end February 2018 from Generations Futures shows levels of pesticides in French produce – fruit and vegetables – at increasing levels and grapes as the worst culprit . Not surprising when you see the global statistics for glyphosate use above.

I don’t want it in my food or my wine. Meanwhile Que Choisir, a consumer watchdog magazine in France analysed 40 Bordeaux wines, mostly grand cru classés from 2014 and found the majority contaminated with pesticides, but with a significant improvement on the same analysis done four years previously. Good news for those of us living in Aquitaine but not good enough. Organic conversion continues to increase with 9% of French vineyards now organic compared to 1% when we started out in 2005.

At Chateau Feely we have not used herbicide since we bought the farm in 2005. After a few years the ‘bad weeds’ had all but disappeared competed out by the good weeds like clover that we want to fix nitrogen in the soil. All of these plants come to do something, they have a purpose, they are bringing back the equilibrium. Each wild plant tells us something about what is going on with our soil.

When we arrived the farm adviser we inherited was obsessed by the mauvaises herbes ‘the bad weeds’ he saw all over the vineyard; the kind of plants that we don’t want; four in particular that were ‘rampant’ chiendent (Elymus repens, couch grass), liseron (Convolvulus arvensis, field bindweed), chardon marie (Silybum marianum, milk thistle) and ronce (Rubus fruticosus, blackberry).

The farm adviser was adamant that we should herbicide the vineyard. There was no getting away from these evils by other means. What is ironic is that it was this very thing -herbicide -that was used by our predecessors that had given these ‘evils’ the head start. When you don’t use herbicide and the ‘good weeds’ out compete the ‘bad’. 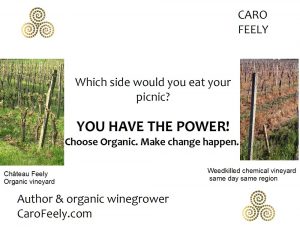 wild plant growth in check by mowing between the rows and plowing with a mechanical hoe under the vine row.

Organic guarantees that no weedkiller has been used in the production of the food or drink. Buying organic shows that you value your health, that you respect the people growing your food and those living where your food is grown. To good health!

See our series on why organic starting with these basics in more detail. Come and learn more about organic farming with a visit to Chateau Feely in South West France ; stay with us or do a multi day course or multi day tour .

You can read about the story of our organic farm the series includes three books Grape Expectations; Saving our Skins and Glass Half Full by Caro Feely. Join our mailing list to receive our seasonal newsletter, events, wine pairing, recipes and more info on this topic at the bottom right of this page. 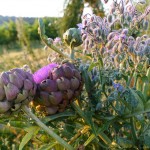 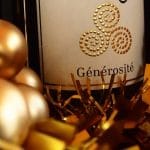 Wine and Spirit – Soul rather than distilledBiodynamics, Why choose Organic Wine, Wine tasting