Before and After Photos

Before and After Photos at Chateau Feely

If you read Caro’s books you know that Caro and Sean Feely bought this farm that was in liquidation in 2005. It was run down and in partial ruin. Each year, as budget allows, the Feelys lovingly restore another piece of this small piece of paradise.

In this post Caro shares some photos from the archives and an excerpt from Grape Expectations, from the day friends, Helen and Derek Melser, cleared the brush and forest and the Feelys discovered the building that would become the Wine Lodge. 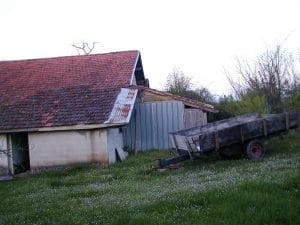 Tasting room  – before and after 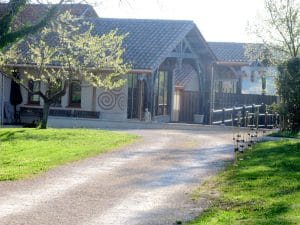 We had to use some strong imagination! In our first year we cleared the room on the left of the first photo to create a tasting room mark 1. It was a team effort as can be seen below Sophia helping Caro to clear debris. A neighbour helped us redo the roof and put in a new window and door. Later we turned the lean to on the right of the first photo into a terrace area that would eventually become the tasting room mark 2 five years later (second photo). 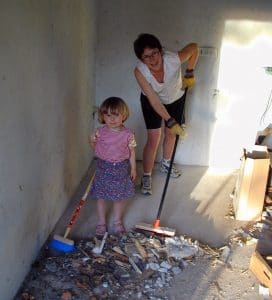 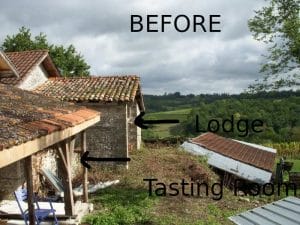 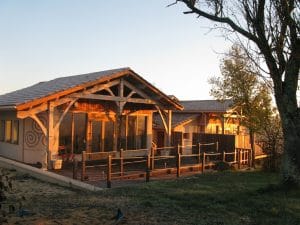 Here is an excerpt from ‘Grape Expectations’ about finding the Lodge ruin you see in the left photo above. We didnt even know the ruin with the arrow saying ‘Lodge’ was there. The arrow ‘tasting room’ is the ‘lean to’ after we had turned it into a covered terrace to extend the tiny tasting room (after the clearing described below). It would eventually become the current tasting room above.

“Helen and Derek, friends from New Zealand, arrived. Helen was blonde with wonderful apple cheeks, the look of a happy chef and a gift for creating gourmet delights. Derek was witty and wiry. He had a doctorate from MIT, but preferred to spend his days making furniture or growing olives on their smallholding.

‘We want to clear the brush around the cliffs near the hangar,’ said Derek. ‘It looks like a satisfying job. I think it will take about three days.’

‘How will you do it?’ asked Sean, lifting his chin off the ground. We had looked at the wall of brush that Derek was referring to and decided it was not a job for a man, rather for a very large machine. The ‘brush’ was at least 5 metres deep, 3 metres high and about 100 metres long.

‘With your chainsaw that I saw in the shed. I’ll cut it down with the chainsaw, Helen will help me pull it out, then we’ll burn it.’

Derek had sussed out the brush and done an inventory of our tools.

The next day when I went down to give them a hand they had already uncovered the first section of a magnificent amphitheatre of white cliffs that had been a quarry hundreds of years before. Derek cut back swathes of plant matter then Helen dragged the trees and brush out to feed the bonfire. They were a phenomenal team. Some of the brambles were as thick as a man’s arm and 50 metres long.

When Sean came up from pruning and saw what they had done he said, ‘We’re wimps.’

On the third day they moved up to the section on top of the cliff. This dense wall of growth ran from the tasting room to the far side of the winery. From the vineyard below we could see there was something on the back of the winery, perhaps old rabbit cages. Sean and I had tried to reach it by cutting a path through the brush and failed.

It was like Sleeping Beauty’s forest, impenetrable. Or so I thought.

That evening Sean called me with excitement. ‘Come and look, Caro!’

Around the side of the tasting room, a magnificent view had opened up, and the building wasn’t old rabbit cages: it was a solid stone structure on two levels of 20 square metres each. To the side of it were two low stone buildings. My mind raced off, imagining all sorts of options for this new find.

‘Is the building on the cadastrale?’ asked our friend Tim, a retired engineer who knew all about building in France.

‘I don’t know.’ We had a copy of the cadastrale, or commune map, of our property which included all the official buildings, but I hadn’t thought to look at it.

‘If it is you should get planning permission more easily.’

As soon as I got off the phone I checked the cadastrale and found the ruin on it. I was over the moon with excitement.”

(adapted from Chapter 12 of Grape Expectations) 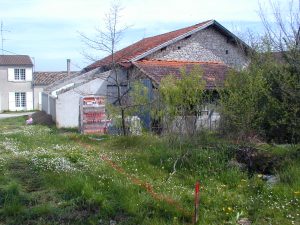 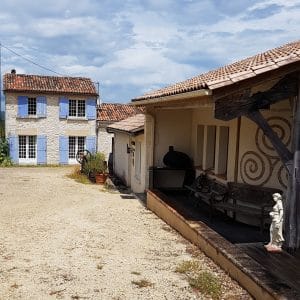 That news meant we could start to plan our next phase, the new tasting room and the wine lodge accommodation –  part of the story in the next book in Caro Feely’s series called Saving our Skins.

The main house – in the background of the two photos above, is a maison fort from the 17 and 18th century. It was covered in concrete. Now the beautiful cut stone is exposed and it has our signature ‘garrigue (provence) blue’ shutters.

The oldest part of our fortress farmhouse, our kitchen, was a lookout from around the 14th century – built above the cellar that has walls that date to the 9th century can been seen below.

In these strange days it does us good to remind ourselves of how far the renovation of this farm has come. Thank you to all of the amazing people that have helped and supported us on this journey.

Most important is the renovation of the farmland – a legacy we leave to the next generation in the widest sense of the term; a legacy to humanity of restoring, regenerating and revitalising through the work of organic and biodynamic agriculture, rather than poisoning. The result of this work is more difficult to see at a glance than a building renovation, but it can be seen in the health of our vines and tasted in Feely natural, organic and biodynamic wines.

Shortly we’ll follow this post with a retrospective of the major projects and achievements over the years.

Read an article of how we Followed our Dream.

Order your Feely organic biodynamic wine online at our mixed case with eu shipping page or at the Feely wines online boutique where you can order by bottle then add shipping at the end.

Experience a taste of France with virtual wine experiences.

Read the full story of our vineyard adventures in the book series; ‘Grape Expectations’, ‘Saving our Skins’ and ‘Glass Half Full’. 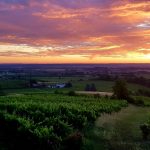 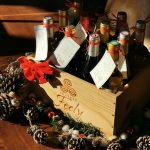 12 Days of ChristmasBooks, News, Wine
We use cookies to ensure that we give you the best experience on our website. If you continue to use this site we will assume that you are happy with it.AcceptRead more