Debate: Is the use of copper in organic farming ecological?

Some winegrowers say organic farming is not ecological because the fungicide used by organic growers, copper, is toxic. Headlines like: « Organic winegrowers pollute as much as conventional” have been touted on the internet. This is fake news.

Copper is a natural mineral found in the soil.  It has been used as an anti-fungal by farmers for more than 2000 years. The natural concentration of copper in the soil is 3 – 100 milligrams per kilogram and certain observations have found up to 500 milligrams per kilogram. Over the long term excessive copper use can create soil toxicity. Studies show that a dose of up to 2 kg / ha is used up by the plant life and hence there is no long term copper buildup in the soil.

Copper is not a synthetic pesticide. Synthetic fungicides used in conventional farming can be carcinogenic (give you cancer), nervous system disruptors and endocrine disruptors.

The level of copper in organic wines compared to conventional wines

Gilles-Eric Séralini and Jerôme Douzelet (see our previous articles Seralini’s table to help identify pesticides in wine by taste and a review of their book Gout des Pesticides) conducted research on levels of copper in wines.

With 0,15 milligrams per litre, Seralini notes that an 80kg human would have to drink 80 litres of organic wine per day to reach the threshold of acute toxicity of copper. He recommends putting the level found in perspective by considering that a doctor can prescribe copper capsules of up to 1 mg / day to stimulate the immune system.

By comparison a conventional top end Bordeaux wine contained 146 microgram per litre of Boscalid – a synthetic fungicide that attacks thyroid and liver and is a possible carcinogen. This level is 1460 times higher than the level allowed in drinking water. The recognised acute toxicity of Boscalid is 4 times greater than that of copper. Seralini states that taking into account the undeclared petroleum and arsenic residues with which Boscalid is delivered for sale chronic toxicity could be reached with consumption of as little as 22 millilitres of a non-organic wine.

The year 2018 brought many new organic vineyards despite the difficult conditions. Prestigious wine estates in the Bordeaux converted to organic, for example Chateau Latour and Guiraud are fully certified and Chateau Angélus and Montrose have started conversion. These estates would not convert if copper was a risk for their vineyards or their wines.

The takeaway – only drink organic wine -and if you hear someone spreading anti-organic fake news about copper stop them with the facts.

See our series on the series of ‘why organic’ blog posts and find Feely organic biodynamic wine online here. Come and learn more about wine and organic farming with a visit to Chateau Feely in South West France ; stay with us or do a multi day course . Read about the story of our organic farm the series includes three books Grape Expectations; Saving our Skins and Glass Half Full by Caro Feely. Join our mailing list to receive our seasonal newsletter, wine school, events, wine pairing, recipes and more info on this topic at the bottom right of this page. 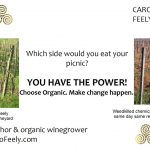