A Sparkling Christmas in Bordeaux

A life-saving adventure and the meeting of two cats

On a cold and foggy Christmas Eve Monsieur Gims stepped out onto Rue Ste Catherine, the longest pedestrian shopping street in Europe. Dressed in his best black velvet suit and hat, umbrella twirling on his arm, he was ready for a rowdy night with his band, the Howlers, Bordeaux’s finest street cat musicians.

At the top of the street he looked across Place de la Comédie. Christmas lights glowed on the square bringing a warmth to his soul. As he paused to take it all in, a petite tabby in a glorious red evening dress descended the steps of the Grand Hotel, two body guards a few paces behind her. Monsieur Gims stopped for a moment to bask in her beauty. She looked vaguely familiar.

Ah oui! She was Princess Leah, her photos graced the society pages of a magazine that lined his modest sleeping quarters. He had never been this close to royalty. He stopped to watch for a moment, then as he took off again he saw a shadow flash behind a column of the Grand Theatre opposite the hotel. It zigzagged from column to column following the Princess. Gims took up the chase at a nonchalant pace keeping his eyes on the Princess and the hooded figure.

Leah turned into the restaurant at the side of the Grand Theatre. A Christmas tree of delicate handmade decorations and twinkling lights adorned the entrance giving a sense of the luxury inside. Gims followed discretely and saw the Maitre D’ welcomed the Princess like an old friend. As he crossed the threshold a couple of steps behind the unidentified figure he caught a glimpse of the face under the hood, a Siamese, a steely stunner that looked ruthless.

The Maitre D’ led Leah to a table where a handsome black cat was seated. Now that Gims knew where the Princess was he turned to look for the Siamese but she had disappeared.

‘A table for one Monsieur?’ said the Maitre D’.

‘Please,’ said Gims and followed to a table two over from Leah. It was perfectly placed, he could see her, the entrance and the kitchen door. How he would pay his bill was another story. Gims felt a touch of jealousy towards the handsome cat at Leah’s table as he saw him whisper something to her and kiss her paw.

Dinner passed slowly and luxuriously, Arcachon oysters, seared local organic trout followed by Bordeaux pigeon. Gims had never eaten so well, except perhaps when Roddy and Cathy were in town. He was beginning to wander if it was all a big mistake. Perhaps the Siamese was an innocent passer-by. Doubts filled his head. How would he pay the bill for the evening? As he licked his lips and pondered his dilemma the Siamese walked into the hall dressed in a waitress outfit balancing two glasses on a tray. She made for Leah’s table.

‘Your highness, your champagne,’ said the Siamese.

‘Oh, your charming gentleman friend ordered it for you to toast Christmas at midnight,’ said the server and winked at her partner.

‘Why thank you Zoro,’ said Leah. ‘To Christmas!’

They clinked glasses and as she lifted the glass to her lips Monsieur Gims bounded out of his chair and hit the glass out of her hand. It smashed onto the floor.

‘What the?’ screamed Leah.

‘It’s poisoned,’ shouted Gims as Leah’s bodyguards pounced on him. The mock waitress took off and jumped into a waiting getaway car.

The Maître d’ screeched to a halt beside the pool of champagne and smashed glass. He placed his paw in the spilled liquid and sniffed.

‘By Noel, I think he’s right,’ he said. ‘That champagne was laced and that woman is no waitress here, I’ve never seen her in my life. You may have saved the princess’ life Monsieur.’

‘I saw the Siamese follow you from your hotel. It seemed too suspicious to ignore.’

‘But you are a marvel! My bodyguards didn’t pick anything up but you did. How can I thank you enough? You saved my life!’

‘Well, you could start by paying for my dinner tonight,’ said Gims, ‘I’m a street cat, I’ve never eaten in a place like this.’

‘Of course! But not only that I’d like you to join my security service. You’ll never want for anything again.’

‘But I don’t want a job working for you, I’d rather have a date with you,’ said Gims.

‘Oh Monsieur, but I am already promised to Zoro,’ she said.

‘The cat that ordered the poisoned champagne?’ Asked Gims with a raised eyebrow.

‘I never did such a thing,’ said the suave black cat rising from his seat.

‘I think you did,’ said Gims. ‘Otherwise why did you accept the gift said to be from you?’

The bodyguards didn’t move. Zoro took a swing at Gims and missed.

Zoro ran for the door and the Princess shouted. ‘Arrest him!’

Her bodyguards took chase and caught Zoro as he tripped on the steps outside. They handcuffed him and led him to the police car that had arrived at the scene.

As a detective took a sample of the champagne from the floor Leah’s face took on a look of hurt and anger.

‘This explains a lot,’ she said. ‘Ever since I changed my will to leave everything to Zoro I have experienced the strangest close shaves.’ She began to weep. ‘I’ll never drink Champagne again.’

‘Don’t cry Princess,’ said Monsieur Gims passing her his handkerchief. ‘I know a lovely organic sparking rosé wine. It’s called Feely. Do you know it? Much better than Champagne.’

‘Oh mon cher Monsieur, you are more than a life saver! You are also a wine connoisseur!’ Leah said wiping her tears. ‘Won’t you join me for a nightcap? Perhaps you can introduce me to this delight?’

‘To my life saver!’ said Leah.

‘To you dear Princess!’ said Gims.

Read the next episode Gims, the cat, gets the love of his life back

See the chateau Feely animals in their natural habitat. 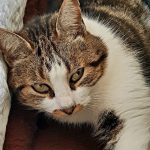